The Girl in the White Pinafore 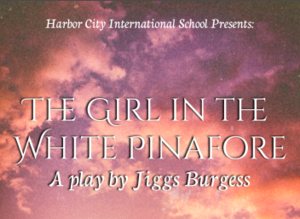 This years fall production will run December 5th-7th at 7:00 and December 8th at 2:00. $5 for Students, $10 for Adults
On the last day of his life, William Chesley Shaw is haunted by his past. The former superintendent of the New London, Texas school district, Mr. Shaw can't let go of his guilt over the events of March 18, 1937. It was on that fateful day that a gas leak beneath the school caused a huge explosion, killing over 300 people, mostly elementary school children. Some of the young victims, led by Amelia (the girl in the white pinafore), now haunt Shaw. Hurt and confused, Amelia cannot move on until she can both forgive Shaw and herself for her own mistakes. More a story of the search for redemption than an outright ghost story, "The Girl In The White Pinafore" asks tough questions about guilt and grief and is based on real events that touch our lives still.